Lauren Pluss from Capability Scotland explains why they launched their digital campaign Xpress Urself to help raise awareness about the different ways that people communicate.

Communication is at the heart of everything we do on a day to day basis. It’s how we form relationships, express decisions and pass on ideas – whether that’s saying what you want for dinner or sharing your dislike for the latest potential Christmas number one.

For some people communicating their thoughts and feelings can be a real challenge. Nearly 1 in 50 children in Scotland need help to communicate. Capability Scotland has dedicated speech and language therapists who work with children and adults to find suitable ways for people to express their views and opinions.

Greig has cerebral palsy and attends our Upper Springland service. He said:

“When I was young I found it very difficult to communicate. I would be with other children playing games but couldn’t spontaneously input into conversation. By the time I was given the opportunity to communicate the moment had passed which I found frustrating.”

Now, thanks to the support of our speech and language therapists and his own determination, Greig is able to communicate effectively with the use of his AAC device. Not only can he voice his opinions, needs and wishes, but his device also integrates with his computer, telephone and television enabling him to express himself in numerous different ways. From singing in ‘When Your Voice Is But a Whisper’ to helping to teach students at Dundee University about communication tools, the sky is the limit for Greig!

We support a number of people of all ages, like Greig, who use communication aids and symbol books to interact with the world around them.

Resources like www.nowhearme.co.uk are great at raising awareness and it’s a resource that is commonly used by the staff in our schools and services, including the staff at our Corseford School who have recently used the e-learning modules to help further their knowledge of AAC.

Throughout December we’ve been publishing a range of case studies from the people who use our services about the way they express themselves to help raise awareness, from poems to inspiring work with universities – there are lots of exciting stories to share.

For example, one of the students at Corseford was so enthused by learning Spanish that he asked for his device to be programmed with Spanish words. Now he is often heard greeting people along the school corridors and chatting to the staff at lunch time in Spanish!

At the other end of the spectrum, even being able to communicate a yes or no is really important and gives a person the power to take control over their lives. That’s why we’re calling on everyone to #XpressUrself. 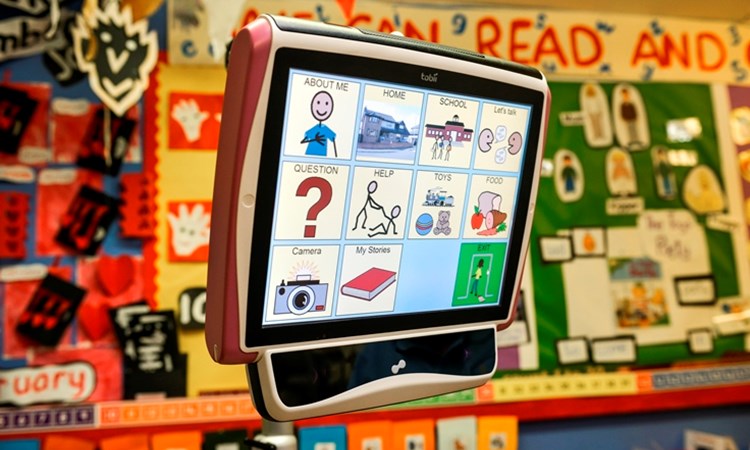